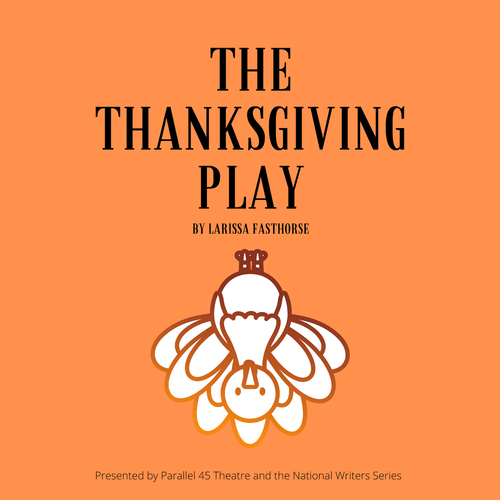 Parallel 45 Theatre performs a virtual staged reading of the award-winning play "The Thanksgiving Play,” followed by an NWS interview with the playwright, Larissa FastHorse. This contemporary satire explores our beloved national holiday and asks, "how does one celebrate Thanksgiving and Native American Heritage Month at the same time?" In Larissa Fasthorse’s 2015 biting satire, this is the question facing three “woke” white thespians tasked with devising an elementary school pageant about the first Thanksgiving while avoiding any culturally appropriative missteps. The play is hilarious, but also delivers thought-provoking dialogue around race and equity.

"The familiar, whitewashed story of Pilgrims and Native Americans chowing down together gets a delicious roasting from expert farceurs." — JESSE GREEN, THE NEW YORK TIMES

Larissa FastHorse (Sicangu Lakota Nation) is an award winning writer and co-founder of Indigenous Direction. Her satirical comedy, The Thanksgiving Play (Playwrights Horizons/Geffen Playhouse), is one of the top ten most produced plays in America this season.  She is the first Native American playwright in the history of American theater on that list.

In 2019 Larissa entered film and television with a series at Freeform co-created with Courtney Hoffman.  Since then she has set up a movie for Disney Channel and a special for NBC.  She is currently in development as the creator for projects with Taylor Made Productions, Echo Lake, and another NBC project.  Film and TV feel like coming home to Larissa who began her writer training as a Sundance Native Feature Fellow, Fox Diversity Fellow, ABC Native American Fellow, and an intern at Universal Pictures before she found her voice in theater.

Over the past several years Larissa has created a nationally recognized trilogy of community engaged plays with Cornerstone Theater Company.   The first was Urban Rez in Los Angeles.  The second project, Native Nation, was the largest Indigenous theater production in the history of American theater with over 400 Native artists involved in the productions in association with ASU Gammage.  Their current project, The L/D/Nakota Project is set in Larissa’s homelands of South Dakota.  Her radical inclusion process with Indigenous tribes has been honored with the most prestigious national arts funding from Creative Capital, MAP Fund, NEFA, First People’s Fund, the NEA Our Town Grant, Mellon Foundation, Doris Duke Charitable Foundation and others.Larissa’s awards include the PEN/Laura Pels Theater Award for an American Playwright, NEA Distinguished New Play Development Grant, Joe Dowling Annamaghkerrig Fellowship, AATE Distinguished Play Award, Inge Residency, Sundance/Ford Foundation Fellowship, Aurand Harris Fellowship, and the UCLA Native American Program Woman of the Year. Larissa’s company, Indigenous Direction, is a consulting company currently working with Guthrie Theater, Roundabout Theater Company and Brown University.  She is vice chair of the board of directors of Theater Communications group and represented by Jonathan Mills at Paradigm NY.   She lives in Santa Monica with her husband, the sculptor Edd Hogan.