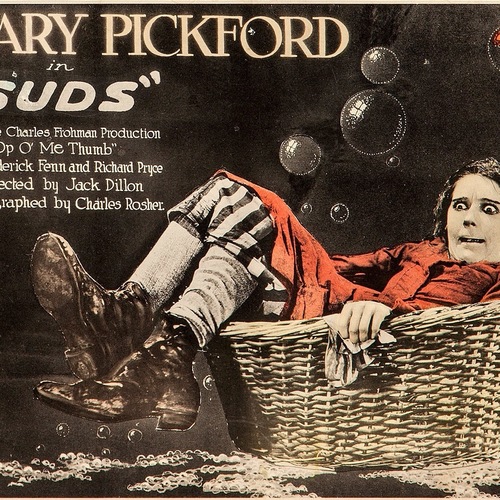 Suds is a 1920 American silent comedy film directed by  John Francis Dillon and starring Mary Pickford. The film is based on the 1904 English stage play ‘Op o’Me Thumb, a one-act work first produced in London and presented the following year in New York with  Maude Adams, a curtain raiser for her appearance in Peter Pan.

Amanda Afflick (Mary Pickford) is a poor laundry woman working in London. She is too weak to do the hard work, but is always picked on and humiliated by her boss Madame Didier (Rose Dione). Amanda is desperately in love with the handsome customer Horace Greensmith  (Albert Austin), but none of her colleagues thinks she has a chance of being his sweetheart.

﻿Experience this classic with the live accompaniment of Dave Calendine on our “Cinderella” Wurlitzer Theatre Organ. Calendine is an amazingly talented organist and pianist and a great entertainer. A resident of the Detroit area, Dave is one of the two organists for The Detroit Red Wings, is the staff organist at The Fox Theater, has accompanied the Rockettes in both Detroit and New York, performs at The Redford Theater and at his church as, well as concerts at the Sanfillipo Foundation in Illinois, and at the national Music Box Society International conventions. Calendine is also the current President of the American Theatre Organ Society (ATOS).

Streaming will start at 7:00Pm on April 13 and will continue until 8:00PM on April 20. Tickets can be purchased on MyNorth Tickets or through our website: musichouse.com.