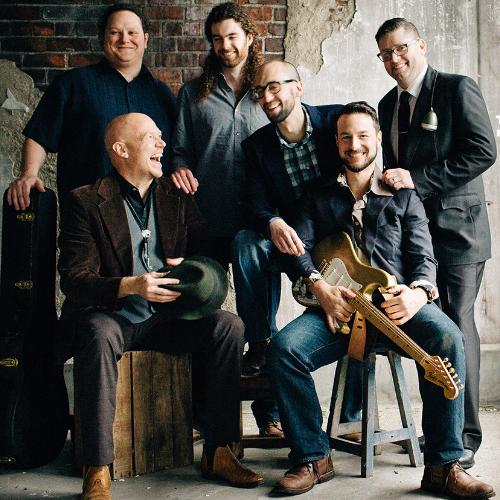 Gopherwood welcomes from Indiana The Legendary Trainhoppers to our stage for the first time. They will bring us new stories from the that state to the south. We hope you will join us as we show them some Michigan hospitality. Get your tickets early and don't miss this show.

In the days of AI and VR, The Legendary Trainhoppers are songwriter/performers in the American folk tradition.

While the band holds a clear vision of what it is, it's composed entirely of songwriters and creative noise makers who each stir their own voices into the mix. The result being a roots oriented yet stylistically complex collection of songs with all kinds of stories to tell.

The Legendary Trainhoppers were initially active from 2005–2007 and released their debut album, Ramble On, in 2006. That record was produced by Scott Mathews at Tiki Town in Mill Valley, CA and featured David Grisman. The band sharedthe bill with The Avette Brothers, The Ike Reilly Assassination and Chevy Downs and shortly thereafter ceased to exist. . .

. . . Until 2015, when the band reconvened to begin work on its sophomore album, Family Tree. Produced by the band, and engineered by Tyler Berggren, Family Tree was recorded at The B-Side at One Lucky Guitar, an intimate performance space in Fort Wayne, IN. It was released in early 2016. The rest of that year and half the next was spent doing all sorts of cool shows and writing and recording the next batch of songs.

The 3rd and latest LP, 2017's Let It Breathe, was recorded by Jason Davis at Off The Cuff Records in Fort Wayne. On this album, the Trainhoppers grow comfortable in the studio and add more sonic complexity to a compelling batch of tunes.