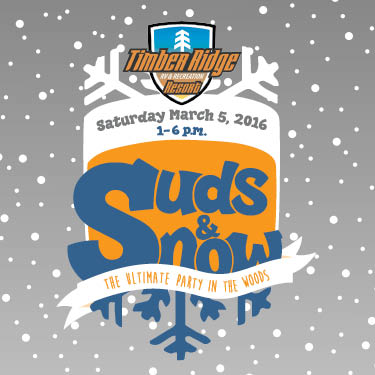 10th Annual Suds & Snow on Saturday, March 5, 2015. Suds & Snow is “The Ultimate Party in the Woods.” The annual event will be held at Timber Ridge Resort in the back wooded trails.

Timber Ridge Resort, Create TC and Craft Beverage Artisans announce the 10th Annual Suds & Snow on Saturday, March 5, 2015. Suds & Snow is “The Ultimate Party in the Woods.” The annual event will be held at Timber Ridge Resort in the back wooded trails. Tickets will be on sale Wednesday, November 25 at 10am at sudsandsnowtc.com. This years event is presented by 4Front Credit Union and MI Local Hops.

Troy Daily, Executive Director of Suds & Snow, is excited about the annual event, “This will be our second year after taking over full operations of the event and we can’t be more excited about the tenth anniversary. This is going to be the biggest event we have done to date, we have some really exciting plans. We have expanded the event space and created an excellent environment to accommodate more people, vendors and breweries. We hope to make this the highlight microbrew event of the year.”

Suds & Snow will take place on Saturday, March 5th. Doors will open at 1:00 pm with live music starting shortly after. There will be two stage areas, one with live music and another with DJ sets from 2Bays DJs. Live music will be performed by Savage Soul, The Pocket and G-Snacks. Savage Soul is a group of talented musicians, consisting of Traverse City locals, performing infused classy rock modern classics and soul felt originals. Christy Savage (vocals), has sang in LA, Chicago, Memphis, Las Vegas, and many other cities. The Chicago Tribune states “This girl sings with her soul.”

The Pocket is a 4-piece band that came out of loose jam sessions at Union Street Station's open mic hosted by guitarist, Chris Sterr. After a couple of serendipitous gigs that Sterr was able to "plug in" this lineup, The Pocket was born. Thriving on their ability to improvise confidently and skillfully through a rather diverse list of styles and genres, they quickly gained momentum. With their residency at Kilkenny's Irish Pub in Traverse City every Wednesday, they have developed into a tight-but-loose unit. The Pocket is Jon Lindy on drums, Stu Ford on bass, Pete Murphy on keys, and Chris Sterr on guitar/lap steel and vocals.

Formed off an 18-hour jam session and armed with a passion for making epic music, the G-Snacks unique sound is sure to please a broad spectrum of listeners. Between the nasty, heavy funk, or the trance/funk/groove jams that feel like a late night festival set you never know what you will hear next. No matter what, the G-Snacks intense and energetic music promises to get everyone moving! If there's one thing that is apparent at a show, its their love for live music!! Party music for the party people!

Attendees will enjoy a half-mile hike to the backwoods where the event will take place. Once arriving at the winter wonderland they will be greeted by over 24 beverage vendors and three food vendors including MI Grille, Roaming Harvest and Daily Blend. There will be three tents with different food selections including Chili, Soups, Burritos, Tacos, Paella, a Pig Roast, and Burger/Brat bar and more. All food will be purchased with event tokens.

Tickets Information: Event time is from 1:00pm - 6:00pm. Tickets are on sale 10am on 11.25.15 at sudsandsnowtc.com or mynorthtickets.com. Tickets will also be sold at local businesses, information can be found on the website. Tickets are $25 in advance and $35 at the door. Tickets include two drink tokens good for one pint equivalent. The first 500 ticket purchasers will receive a FREE Half Pint Silipint glass. A limited supply of additional Half Pint and Pint Silipints will also be available for purchase. Additional drink tokens will be sold for $3 each or 2 for $5. $2 of each ticket sold will go to supporting local Traverse City charities and non-profits. Cherry Tree Inn and Pointes North are the hotel sponsor and are offering special packages that all include complimentary shuttle services to and from the event, reserve at cherrytreeinn.com and pointesnorth.com under “Specials & Packages.” Volunteer sign up will be available soon at sudsandsnowtc.com.

Tickets will begin to be mailed in January. 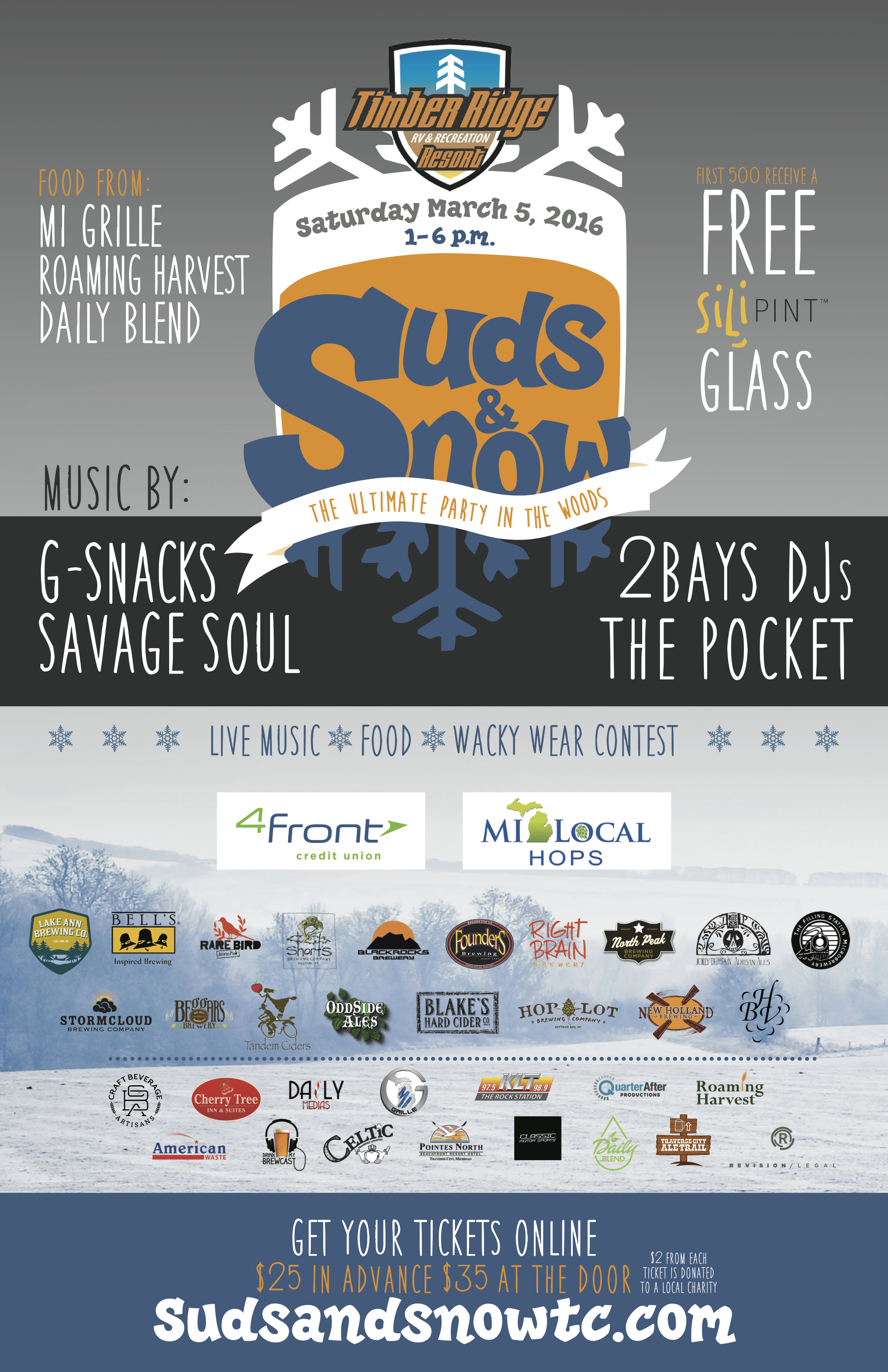