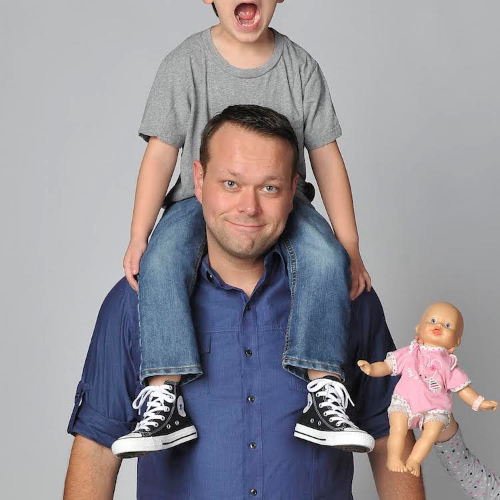 Aaron Kleiber has been entertaining his entire life — from climbing atop his grandmother’s coffee table as a child, being voted class clown in high school, to taking the stage at comedy clubs across North America today.

On the strength of his energizing, crowd-pleasing live performances, Aaron Kleiber emerged as one of the most in-demand feature acts in stand-up - touring alongside Bob Saget, Jim Breuer, Bert Kreischer, John Witherspoon, Josh Blue and Steve-O. Also seen on the #DeathSquad tour with Doug Benson, Tom Segura, Tony Hinchcliffe & Brian Redban and has made multiple (winning) appearances on the top rated podcast "Doug Loves Movies" with Doug Benson - along with the nationally syndicated, Bob & Tom Show. He’s also had the privilege to open for comedy greats like Billy Gardell, Emo Phillips, Bobcat Goldthwait - and one of his comedy idols, Sinbad. Now, Aaron Kleiber, a bonafide headliner himself, playing clubs across the United States and Canada. When in Los Angeles, a regular performer at the Laugh Factory Hollywood and the Hollywood Improv.

Kleiber made his nationally-televised stand-up debut on AXS Tv's 'Gotham Comedy Live' in 2013 (in which his set was used as part of it's 'Best of Season 2' episode) - shortly thereafter made his second on 'Standup and Deliver' on NUVO Tv, filmed live during the Cabo Comedy Festival in 2013. Named a top 5 finalist in the 2014 Big Sky Comedy Festival, judged by the biggest names in the comedy industry (Just for Laughs, CBS, SXSW, Comedy Central). Aaron was also was named by his hometown, “Best Local Comedian” by Pittsburgh Magazine 3 times.

As an accomplished comedic actor, Aaron can be seen in a guest-starring role for the Nickelodeon series 'Supah Ninjas.' He co-starred in the film 'Help Me, Help You' opposite Sabrina Bryan (The Cheetah Girls, Dancing with the Stars), appeared in the acclaimed drama, 'Warrior,' starring Tom Hardy and Nick Nolte, for Lionsgate, featured in the original series The Mercury Men, seen on the Syfy Channel- along with appearing in dozens of national/regional commercials. Seen as the face of the Pennsylvania Lottery as President Grover Cleveland, adding to the muliptle chracters he's played for the PA Lottery. Aaron was known early in his career for producing, writing and acting in both, the groundbreaking independent film (and subsequent Web series) Captain Blasto as well as the beloved Star Wars mockumentary, 'A Great Disturbance,' both of which claimed multiple awards and fans at film festivals and fan fests nationwide. Aaron studied improv comedy and writing at the legendary Second City in Chicago for a short time before having his first child of three.

You can also hear him weekly on his hit podcast "GrownDadBusiness" chatting with comedians about parenting, childhood and the comedy life - with guests like Todd Glass, Harland Williams and Bobcat Goldthwait.

A native of historical steel-town, now a vibrant arts and tech city, Pittsburgh, Pennsylvania, Aaron has been a fixture in the city's booming comedy scene, producing multiple shows monthly like the weekly 'Comedy Sauce' showcase, the longest running independent comedy show in Pittsburgh and 'Standup GetDown,' an original standup comedy gameshow/party/competition with a monthly residence at Arcade Comedy Theater, where he also serves as Standup Director and Leaderboard Member.