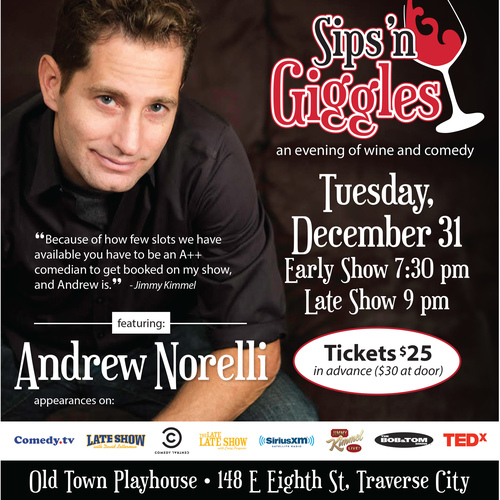 Numerous late night appearances including twice on “The Late Show with David Letterman,” “The Late Late Show with Craig Ferguson,” and “Jimmy Kimmel Live," where he was booked by Jimmy himself who said "because of how few slots we have available you have to be an A++ comedian to get booked on my show, and Andrew is."

Other TV appearances include Comedy Central's “Live at Gotham,” and the nationally syndicated comedy round-table “Comics Unleashed,” where he also worked as a monologue joke writer.

A Ted Talk was recently added to his resume where he hilariously lampooned the absurdity of computer error messages.

His performance at the prestigious Just for Laughs Comedy Festival in Montreal was praised in Time Out New York.

International appearances include Sydney Australia’s Comedy Store where The Daily Telegraph remarked, “his show features hair trigger laughs with a deadly aim, all the more so because while some comedians overestimate their own intelligence, Norelli never underestimates ours."