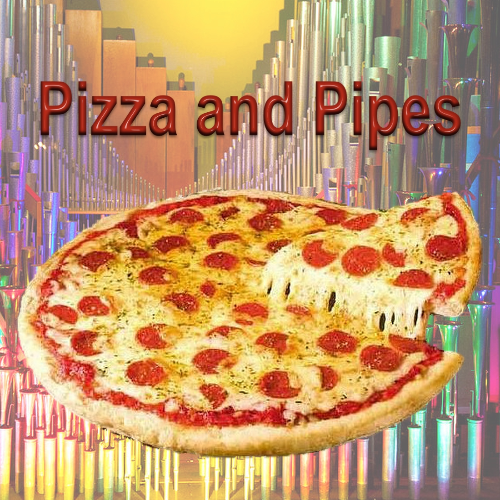 On July 15th the Music House presents a delicious gourmet pizza dinner and a very special concert from Red Wings organist, Dave Calendine on the ‘Mighty Wurlizter’ theater organ. Enjoy a delicious dinner and dessert with a great concert from this popular entertainer. Doors open at 6 pm for dinner, with the concert around 6:30 pm. Tickets are $25 for adults and $10 for children 10 and under.

Dave Calendine is an amazingly talented organist and pianist and a great entertainer. As a young organ student, Dave visited the Akron Civic Theater, where organist Lyn Larsen performed on The Mighty Wurlitzer Organ. Dave was wowed by this incredible pipe organ. By l6, his skills were so impressive that he was offered a job playing the Wurlitzer at the theater. He played there for three years and eventually went on to perform on several theatre organs around Ohio, the US and overseas. Now a resident of the Detroit area, Dave is a staff organist at The Fox Theater, is the organist for The Detroit Red Wings, has accompanied the Rockettes in both Detroit and New York, performs at The Redford Theater and at his church as well as concerts at the Sanfillipo Foundation in Illinois, and at the national Music Box Society International conventions. Dave is a frequent performer for our silent film series at the Music House Museum on the Mighty Wurlitzer organ, which made its way "up north".

Seating is limited and this event unusually sells out! The Music House Museum is a non-profit 501(c)3 organization.