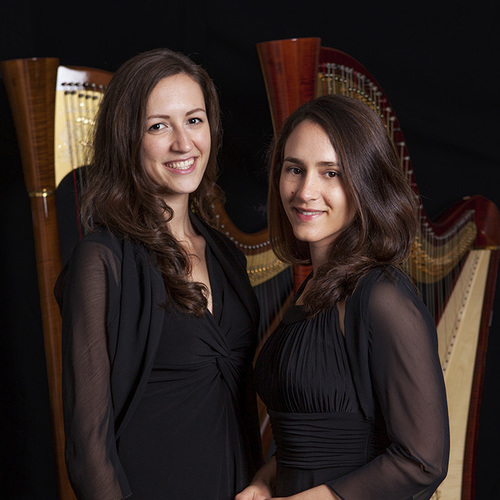 The Music House is excited to announce that Marta Power and Elizabeth Jaxon, The Atlantic Harp Duo, will be at the Music House Museum on October 23 at 7:00PM.

Based in Paris, France, timeless source of artistic inspiration and cradle of the modern harp, the Atlantic Harp Duo ventures beyond the possibilities of a single instrument, enriching their music with the combined sonority of two harps. Founded in 2006 by Marta Power and Elizabeth Jaxon, both natives of the Great Lakes Region of the United States, the harp duo performs regularly on each side of the Atlantic. Ms. Power and Ms. Jaxon both studied under Isabelle Perrin at the École Normale de Musique de Paris. Ms. Power received her Diplôme de Concertiste in 2008, and holds a degree in Musicology (Licence de Musicologie) from the Sorbonne. She has participated in numerous international harp competitions, winning prizes in the Félix Godefroid International Competition in Belgium and the North London Festival of Music and Drama, among others. Ms. Jaxon received her Bachelor’s of Music in 2006 from the University of Illinois where she studied with Ann Yeung. In 2009, she earned her Diplôme de Concertiste from the École Normale de Musique de Paris. During her time in Europe, she was awarded prizes in several international competitions, including the First International Harp Competition of Szeged in Hungary, and participated in the world renowned International Harp Contest in Israel in 2009.

The Atlantic Harp Duo will present their show "Fables, Myths, and Fairytales," offering audiences a rich combination of music and storytelling in which they bring to life a selection of the most timeless stories from our cultural heritage: classics such as Sleeping Beauty and Beauty and the Beast, morality tales of wolves and sheep, and myths from Ancient Greece. Among the musical works that illustrate these stories are several pieces which the Atlantic Harp Duo commissioned specially for the show. Together with the composers, the duo has crafted a soundscape that transports listeners into the fantastic worlds of our collective imagination.