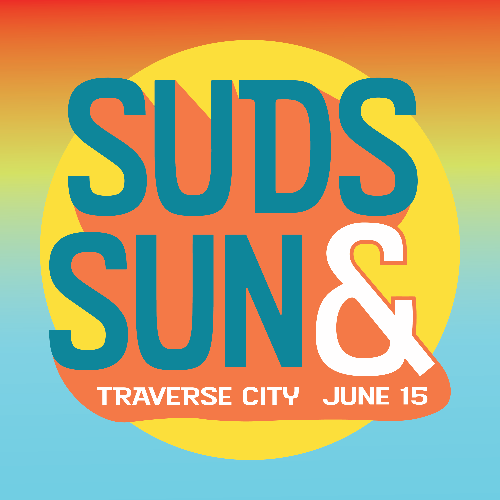 2nd Annual Suds & Sun on Saturday, June 15, 2019. Suds & Sun is “The Ultimate Party in the Sun.” The annual event will be held in Traverse City at The Village at Grand Traverse Commons.

The Village at Grand Traverse Commons, Create TC and Craft Beverage Artisans announce the SECOND Annual Suds & Sun on Saturday, June 15, 2019. Suds & Sun is “The Ultimate Party in the Sun.” The annual event will be held at The Village at Grand Traverse Commons front lawn. The event is presented by 4Front Credit Union and supported by MI Local Hops.

Troy Daily, Executive Director of Suds & Snow, is excited about the second annual event, “Suds & Sun was such a great success last year with almost 1000 in attendance, we want to continue the growth and make this an annual tradition, its a great kickoff to the summer!”

Suds & Sun will take place on Saturday, June 15th. Doors will open at 2:00pm (Early entrance tickets at 1:00pm) with live music starting shortly after. There will be one stage, with awesome summer vibe music from Botala, Soul Patch, Zion Lion and a two-hour dance party from 2Bays DJ headlining the day!

Attendees will enjoy the front cottage lawn of The Village at Grand Traverse Commons where the event will take place. Once arriving at the event they will be greeted by over 18 beverage vendors and two food vendors, Sparks BBQ and Wingz & Thingz. All food will be purchased cash or credit card.

Tickets Information: Event time is from 2:00pm - 8:00pm. Tickets will also be sold at local businesses, information can be found on the website. Tickets are $35 in advance(Early Bird), $40 GA, $70 (Early Bird VI), and $50 for GA tickets at the door, if any remain. Tickets include two drink tokens good for one pint equivalent. The first 300 ticket purchasers will receive early admission into the event and discounted GA pricing. A limited supply of additional Half Pint and Pint Silipints will also be available for purchase at the event site only, not online. Additional drink tokens will be sold for 2 for $5 in advance, online only. Drink tokens at the event will be $3 each. $2 of each ticket proceeds will go to supporting local Traverse City charities and non-profits. FREE shuttle service from downtown Traverse City and local hotels will take place, info available at sudsandsuntc.com

Tickets will begin being mailed mid-May.

Dog allowed if on a leash and good behavior. 21+ event.