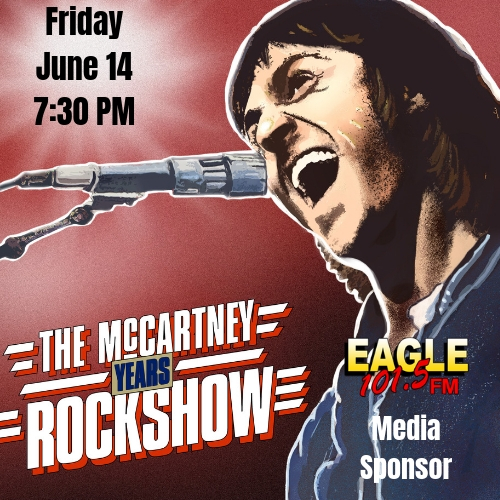 Hailed by the original Beatles promoter as ‘THE BEST ON THE SCENE’, The McCartney Years is a period-true, technically stunning and explosive live concert show that performs the music of Paul McCartney spanning two decades from The Beatles to Wings.

Guaranteed that you will jump out of your seat to clap, sing and dance to the music by one of the most prolific artists of all time in this authentic, timeless live concert experience!

Songs include hits like Hey Jude, Jet, Let It Be, Band On The Run, The Long And Winding Road, Live And Let Die, Lady Madonna and many, many more, plus so me of the deep cuts that McCartney wrote during the 1960’s and 1970’s; all performed to their original arrangements by a band that has entertained audiences worldwide and even has a personal accolade from former Wings Guitarist Denny Laine.

there will be one intermission (concessions line open in Hardy Hall)

ABOUT THE MCCARTNEY YEARS

There are many Beatles tributes. But there’s only one show that celebrates the genius of Paul McCartney at the height of his career in the mid 1970s. And this is it! Praised Sid Bernstein – the promoter who brought the original Beatles to North America – as “the best on the scene today”, The McCartney Years is a note-for-note faithful recreation of a 1973 Wings over America concert.

There are many Beatles tributes. But there’s only one show that celebrates the genius of Paul McCartney at the height of his career in the mid-1970s. And this is it! Praised by the late Beatles promoter Sid Bernstein – the man who brought the original Beatles to North America – as ‘the best on the scene today’, The McCartney Years is a note-for-note faithful recreation of a mid-1970s Paul McCartney concert.

Led by perfectionist Yuri Pool as Sir Paul, the band has a commitment to 100% live and accurate reproductions of McCartney’s concert experience. The show is period-true, technically stunning and sonically explosive. Every note is live and played true to its original arrangement. It has set the standard for all who might follow in this significant body of work. And, it’s a blast to watch and listen to! Whether he plays an original Beatles-era Höfner bass or sports the same wardrobe from the ‘Wings over America’ mid-1970s tour, Yuri is true to Sir Paul in his musicianship, vocal stylings and presentation.

And the band doesn’t miss a beat delivering a texture that will transport you back to the first time you heard these great songs on vinyl. TMY players include David Usselman (guitars and bass); Braden DeCooman (guitars); Hubert Orlowski (keyboards and synth); Laura Gagnon (percussion and keyboards); Dean McKey (drums) and of course Yuri on bass, lead vocals, piano and guitar. Experience three decades of ‘The Beatles’ and ‘Wings’ live – with the world’s premier McCartney concert experience. Rewind into the 60s and 70s to dance, sing and relive your passion for McCartney with a band that has opened for Mariah Carey, performs sold-out shows across Canada, the U.S.A. and Europe and been featured on CNN.

Lead singer and performer, Yuri Pool, began his epic musical journey as a little boy in Holland, listening to his dad’s treasured Beatles and Wings records and subsequently requesting a guitar for his 11th birthday. Completely self‐taught, Yuri made his professional musical debut in the UK, when he was cast in a major theatrical Beatles music production that toured the world, which allowed him to learn, experience, and perfect the nuances of Paul McCartney’s legendary music and performance style. After migrating to Canada in 2007, Yuri embarked as an entrepreneur – he single‐handedly developed The McCartney Years into a period‐true, technically stunning, and sonically explosive production. Whether he’s playing the iconic 1960’s Höfner bass or emulating the same wardrobe from the “Wings over America” mid‐70s tour, Yuri is true to Sir Paul’s vocal stylings and presentation showcased in tracks like ‘Live and Let Die’, ‘Let it Be’, ‘The Long and Winding Road’ and ‘Jet’. His commitment to 100% live and accurate reproductions of McCartney’s concert experience and his tireless, passionate work creating and expanding TMY has received accolades from Wings guitarist, Denny Laine, and was famously praised by Beatles promoter, Sid Bernstein, as “the best on the scene today…” Yuri continues to dedicate all his work and time solely to TMY – meticulously studying the detailed essence of Paul’s legacy and the journey that resulted in the brilliance of Rockshow, which has set a new and undeniable precedence for all the other tribute‐and‐beyond bands of today.

Jennifer Pool, off‐stage and on‐stage wife to lead singer, Yuri Pool, was born and raised on a horse farm in Michigan, where she helped raise and ride competitive show‐jumping and dressage horses. The family farm currently serves as a rescue haven for abandoned and abused animals, including a zebra! Jennifer graduated with her Bachelor’s Degree from Cornell University in 2009, and after a brief stint wrangling cattle in the mountains of Montana and acting and modeling in California, she began her PhD in global health at Walden University while simultaneously teaching at a small school in the Kangemi Slum of Nairobi, Kenya. When Jennifer returned to Michigan, she wrote and published two children’s books, which help fund the slum school. Jennifer met Yuri, and his sweet 7 year old son, Julian, in Canada in the spring of 2015, and the three of them were married the following year at an intimate ceremony in the mountains of Montana. Leaning heavily on her theatrical background and the musical guidance of the entire band, Jennifer joined The McCartney Years as Linda early this year. Yuri and Jennifer have a dog named “Mac” who was born on Paul McCartney’s birthday, Jennifer shares her birthday with Linda McCartney, and Jennifer and Yuri are expecting a baby girl in late August on the same day Paul and Linda welcomed their first child together. Some call that “next‐level” commitment!

During his teen years, David explored many different styles of music and expanded his instrumental palette. Realizing it would enable him to connive his way into more bands, he picked up bass guitar and began singing outside of the safety of his shower. In pursuit of his broad appreciation and understanding of music, David graduated from Fanshawe College’s Radio Broadcasting program in 2008 in London, Ontario, Canada, and its Music Industry Arts program in 2010. Both times he managed to accrue Academic Honours, as well as awards for Best Producer, and Best Performance. David currently teaches students how to turn their amps up to 11 at Walter’s Music School in London, Ontario. He also writes, records and performs his own original music, having shared the stage with acts such as ‘A Friend In London’, ‘Teenage Kicks’, and ‘Sarah Smith’.

Norwich, Ontario, Canada‐native Braden DeCooman started playing guitar in 1999 when he received an antique guitar as a gift. After learning songs by ear from the radio, he enrolled in lessons to perfect the basics of the instrument for about a year, but Braden soon learned he preferred learning and playing by ear. Ironically, his inability to comprehend standard written music forced his high school music teacher to issue a failing mark in grade 11. Braden’s love of music prevailed, however, and he jammed with classmates after school in the high school music room, where he co‐founded the rock band ‘The Red Party Pirates’. After winning their first battle of the bands, Braden began to compose music for and with the band on a regular basis, and the band gained quite a local following. Over the years the band welcomed the opportunity to open for major acts, such as The Joys, April Wine, Grady, My Darkest Days and Sloan. In January of 2010, the band recorded and released their debut album entitled ‘With a Bang’. The McCartney Years are thrilled to have him now – he is also by far the most stylish member of the band.