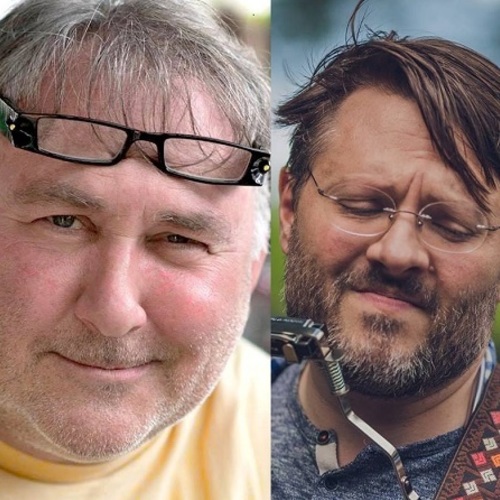 Joe Shields: aka Cousin Joe Twoshacks, aka Joe Cartoon, aka the Joeman , Is your average 58 year old fly fisherman/ award winning cartoonist/animator that bought a guitar 10 years ago and became an award winning singer songwriter.(2016 Kerrville new folk winner) Joe’s songs are heartfelt (sometimes downright sad) with a touch of funny (potentially hysterical) with varying degrees of truth (good luck trying to figure that out.)

Aaron Smith is a man on a mission, but he’s no preacher. His songs never tell the listener what to think or feel, but rather hold a mirror to the mystery of human experience, searching for the meaning of home, love, family, aging, kindness, doubt, faith, and grace. In vignettes injected with an infectious and persistent sense of hope and humor, the unlikely heroes of his songs -- grandmothers and grandfathers, street preachers and neighbors, the forgotten and lonely -- find courage, salvation and a couple of laughs in the everyday. Aaron’s songcraft has earned him recognition twice as a finalist in the nationally renowned New Folk songwriting competition at the Kerrville Folk Festival in Texas, the Ozark Folk Festival and Rock House Festival. He recently won the BMG Songwriter Showcase at the Power of Music Festival in Bentonville Arkansas.