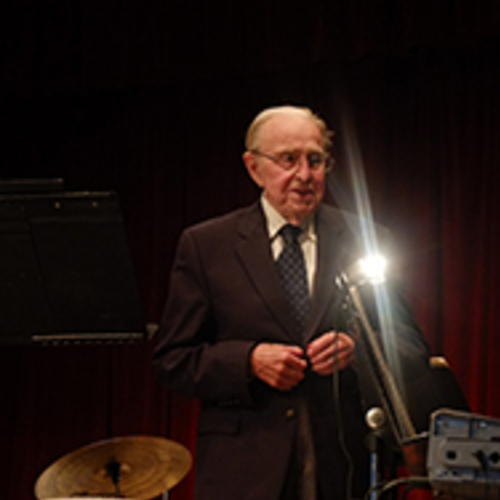 The Harry Goldson Quintet will perform on Sunday, August 25 at the Old Art Building in Leland featuring live jazz music. Harry will be accompanied by Steve Sandner on piano, Elgin Vines on bass, Will Harris on percussion, and Jim Cooper on vibraphone. Doors open at 7 pm; the show will begin at 7:30 pm. Tickets are $25.

Harry Goldson’s musical roots go back to Chicago’s West Side during the 1930’s . . . home to such

Attending the famed Austin High, considered by many music scholars to be the birthplace of swing, Harry became immersed in this music. During the Big Band heydays, Harry moved on to tour with many of the country’s leading dance bands, and played a major role in the creation of the ‘cool sound’ of modern jazz. Recording under his own name, Harry has produced nine CD’s and most recently the CD ‘Let’s Dance’.

Steve Sandner, pianist has been a part of the Harry Goldson Jazz Ensemble since the early 1990’s. After studying trumpet at the Berklee School of Music in Boston and Classical piano at Eastern Michigan University, Steve formed his own jazz combo, appearing at Chicago’s famed Pump Room and Gaslight Club, and Detroit’s Baker’s Keyboard Lounge. His quartet went on to engage long term performances in Singapore, Casablanca and Paris. He has self-produced 5 cd’s and appears on Volume I and II of Harry’s Mood Swing CDs

Elgin Vines has been described as one of the most sought-after jazz bassists in Western Michigan, playing professionally since the late sixties.  Most notably, Elgin maintained an eight-year stint as a member of the ‘New Direction’, appearing on The Tonight Show, The Mike Douglas Show, and the Ed Sullivan Show. The West Michigan Jazz Society named him ‘2005 Jazz Musician of the Year’ with a cover story in their June-July publication, ‘Jazz Notes’.

Will Harris, percussion, is actively involved in sharing music through teaching as well as performance. He is an active member of the Lucas Paul Band, Don Julin Quartet, and the Joe Wilson Trio.

Jim Cooper, vibraphonist, pianist, and composer has been playing for more than 30 years leading      numerous groups and making appearances as soloist and sideman. A Delmark recording artist and     long-time music educator, Jim has toured worldwide and has three CDs under his own name.

This concert is sponsored, in part, by the Leelanau Community Cultural Center, Edmund F and Virginia B Ball Foundation, the Michigan Council for Arts and Cultural Affairs, and the National Endowment for the Arts.