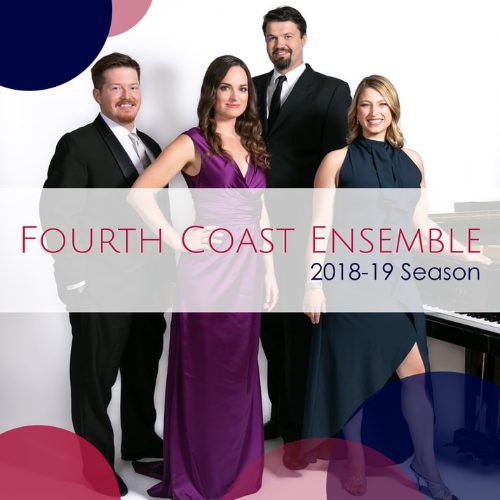 Fourth Coast Ensemble creates a dialogue that invites each audience member to feel comfortable, as though they were listening to music in their own living room surrounded by friends.

5:00pm event begins in the Theatre

6:30pm Artist meet and greet in the Ballroom

This show is presented by the Shoreline Music Society in partnership with the Ramsdell Regional Center for the Arts.

Founded in 2013, Chicago's Fourth Coast Ensemble is a vocal chamber quartet committed to performing programs of creative and accessible vocal chamber music. With a repertoire spanning Romantic to Contemporary, Fourth Coast Ensemble presents salon-style performances in venues ranging from parlor to concert hall. The goal at each performance is to communicate an atmosphere of warmth, variety, and genuine expression.

In May of 2018 Fourth Coast Ensemble performed the world premiere of Chicago composer Wayland Rogers’ new song cycle I-THOU, marking the first new commission by this ensemble, and solidifying the group’s commitment to create a meaningful presence in the Chicago cultural community. Fourth Coast Ensemble was the ensemble in residence at Baroque on Beaver, a classical music festival on Beaver Island, Michigan, during the summers of 2015 and 2016. The quartet has presented master classes in art song and music business at Roosevelt University and Olivet Nazarene University.

Fourth Coast Ensemble creates a dialogue that invites each audience member to feel comfortable, as though they were listening to music in their own living room surrounded by friends.

ABOUT THE SHORELINE MUSIC SOCIETY

Experience classical music in a whole new way. The Shoreline Music Society transforms a concert experience into a conversation among friends. Your ticket brings you an up-close-and-personal experience with the music, Artistic Director Robert Nordling, and Shoreline’s world-class performers. Welcome to the conversation – welcome to the Society. A partnership with you, the Ramsdell Regional Center for the Arts, and Manistee.

Robert Nordling serves as the Music Director of the Bandung Philharmonic (Indonesia), the Baroque on Beaver Island Music Festival (Northern Michigan) and the Lake Forest Civic Orchestra (Chicago). Robert has appeared in orchestral performances across the world, and conducts orchestra clinics, music educational workshops and master classes in schools in the USA and abroad. He has served on the music faculty of the Calvin College Music Department and Trinity International University, where he conducted the orchestras and taught in the areas of music history, music appreciation and conducting.