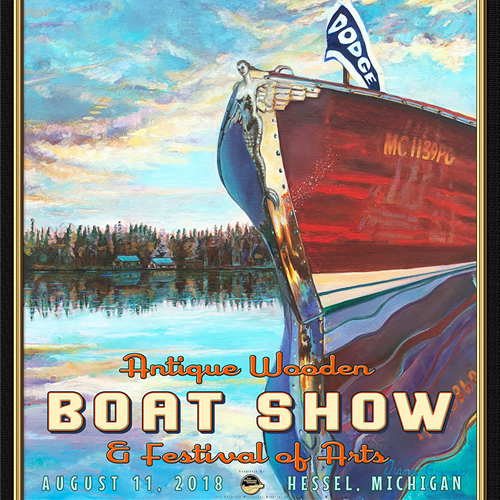 THE LES CHENEAUX ANTIQUE WOODEN BOAT SHOW AND FESITVAL OF ARTS IS HELD IN THE UPPER PENINSULA OF MICHIGAN IN THE VILLAGE OF HESSEL, MICHIGAN. FOUNDED IN 1978, THE EVENT IS HELD EVERY YEAR ON THE SECOND SATURDAY IN AUGUST.

The 2018 show will be our 41st year and we will be showcasing Dodge boats. These rare antique watercraft were produced by Horace E. Dodge Boat Works of Detroit, MI from 1922 until 1929 and the Horace E. Dodge Boat & Plane Corporation of Newport News, Virginia from 1929 until 1946. Building Dodge Boats was the dream of a
young, rich playboy in the mid 1920's whose idol was Gar Wood. His father and uncle were the famous Dodge Brothers, and his mother owned the largest steam powered pleasure boat in Michigan. In 1923, three years after the year in which both his uncle and father died, he convinced his mother to give him enough money to start the Horace E Dodge Boat Works in Detroit. The boats were called Watercars and were advertised as "the world's lowest priced fine motor boats". In 1931 manufacturing was moved to a new facility in Newport News, Virginia; said to be the world's largest motor boat plant. Due to Horace Jr.'s lifestyle (partying and wife changing; he had six) the
business was shut down by the family in 1936. The facility was reopened for WW II to build boats for the US Navy. After the war it was leased to Gar Wood for motor boat and road building equipment manufacturing.

The Les Cheneaux Islands Antique Wooden Boat Show is held each year in the beautiful Upper Peninsula town of Hessel, Michigan. Some of the country’s finest boats call our rustic Les Cheneaux Islands home. Most of these boats are used daily during the summer months as a primary mode of transportation to and from the cottages dotting the area’s 36 sheltered islands. Les Cheneaux has a rich heritage in boat building and repair. Our craftsmen continue to offer some of the finest restoration and repair services available.
Entries in the boat show arrive each August from as far as California and Florida and include dinghies, rowboats, canoes, launches, sailboats, utilities, runabouts, large cruisers, racers and classic non-wood.

The Festival of Arts is held in conjunction with the Antique Wooden Boat show and invites artists to display and sell a variety of artwork, including photographs, painting, pottery, stained glass, textiles and jewelry. Around 65 of the midwest’s finest artists participate in this juried show.

The Les Cheneaux Islands Antique Wooden Boat Show has been a major attraction since it began in 1978 and it continues to improve every year. Two seasonal residents of the Islands, Chuck Letts and Ken Horsburgh each had beautiful antique wooden boats and felt there were more boats from early 1900 through the 1930’s still used in the Islands than anywhere else because of the cold water and short boating season. Thus the boat show began in the small town of Hessel. They formed a committee and had 30 volunteers to help. Today we attract about 150 antique and classic boats and have more than 300 volunteers to assist with this amazing show. It is known as one of the largest shows featuring antique and classic wooden boats.
Mertaugh Boat Works, which is included at the eastern end of the boat show, had the first Chris-Craft franchise in the United States and continues to thrive.

No animals, alcohol or smokingallowed inside gate 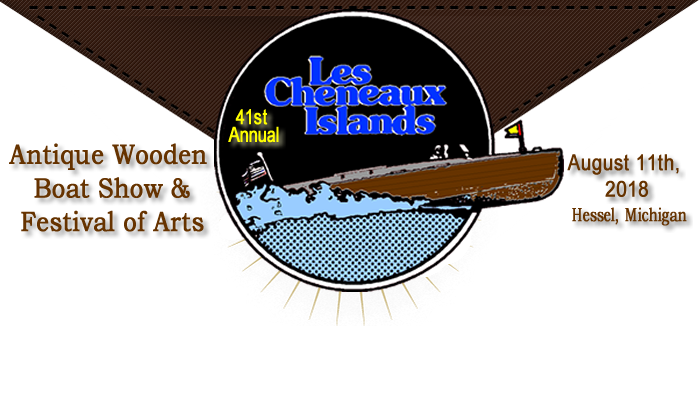